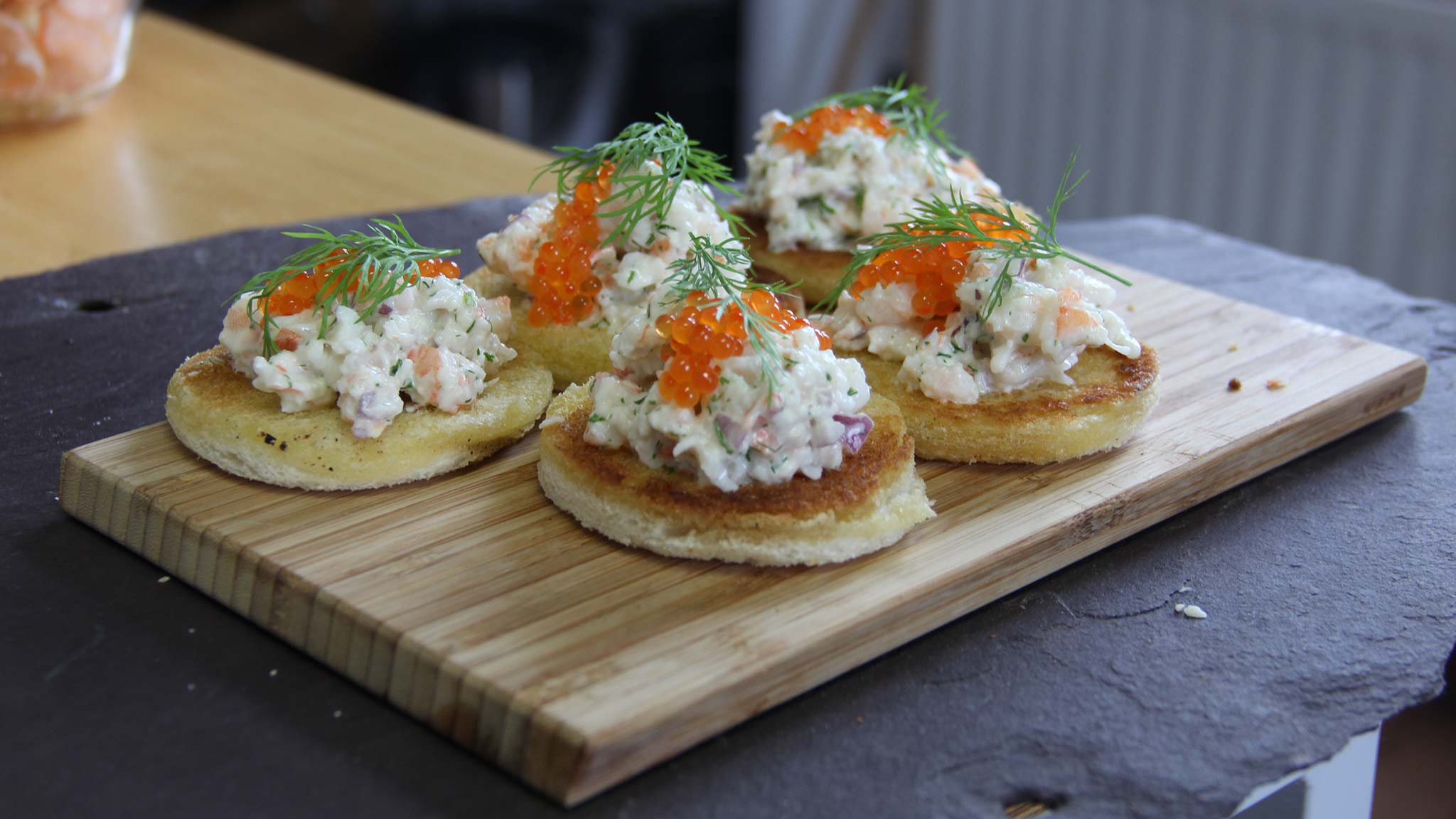 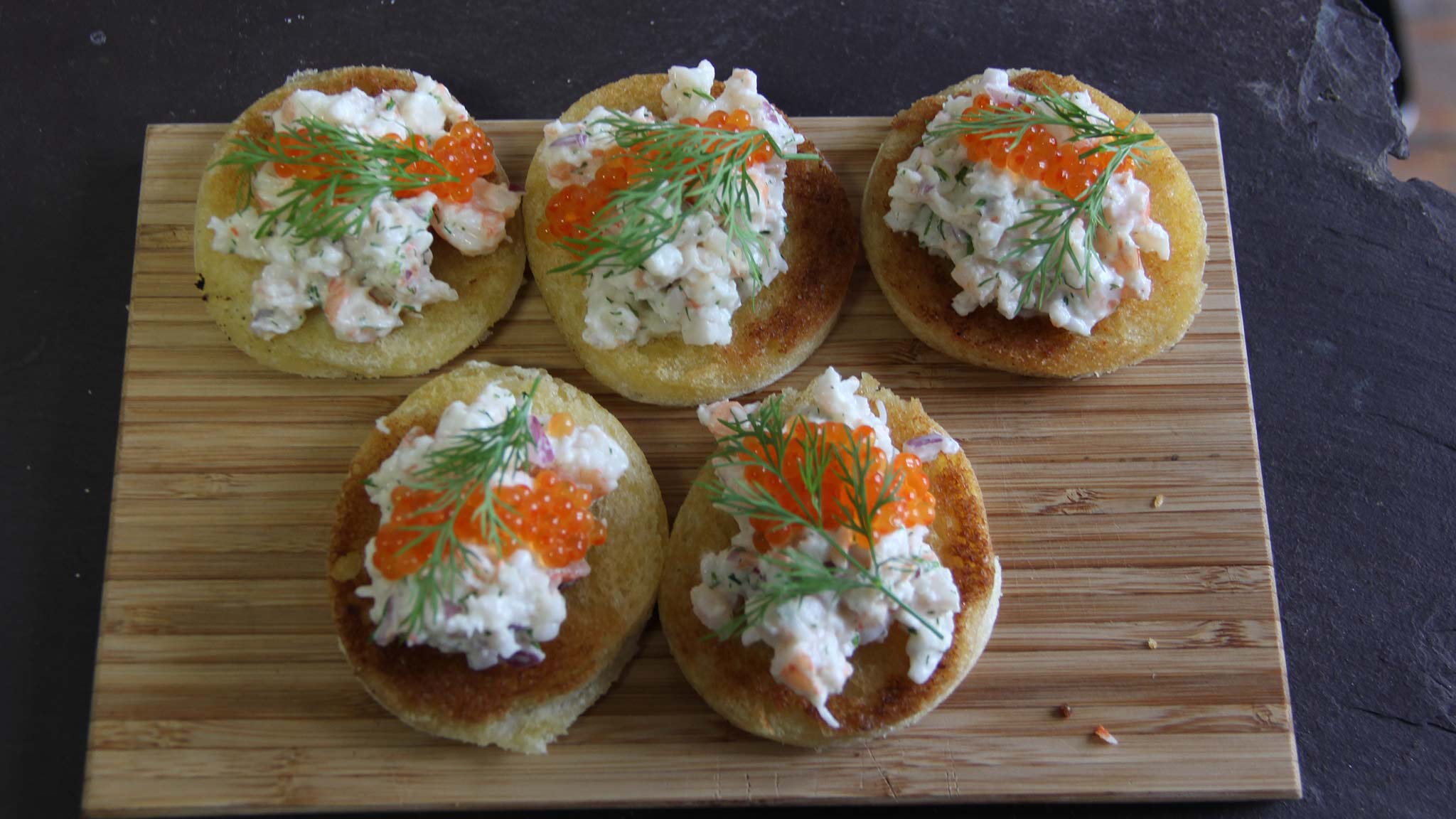 recipe by Peter from Drop https://getdrop.com/

If you’ve been looking for a festive appetizer that’s quick and easy to make, but will blow your dinner guests away, look no further. Tore Wretman, the legendary Swedish restaurateur, created the dish in 1956 while on a sailboat outside of Skagen, Denmark’s northernmost town. Wretman was participating in a regatta and his crew had decided to take a somewhat unique route, far away from the rest of pack. Suddenly, the wind dies completely and they come to a halt. The crew, which was in the lead up until now, sees boat after boat pass them on the horizon. The mood drops. To get everyones' spirits up while waiting for the wind to return, Wretman decides to cook for his crew with the few ingredients he can find in the galley. The rest is, as they say, history. In its essence, Toast Skagen is a basic shrimp salad on toast, but what takes it to a completely different level is its focus on fresh, perfectly balanced ingredients. First, the crustaceans: for Toast Skagen, you want to use the smaller variety of shrimp (Pandalus borealis), often referred to as pink shrimp, northern shrimp, or northern prawn. You can either buy them fresh (highly recommended!) or frozen. Stay away from flavorless jumbo shrimps. Peeling fresh shrimp can be a bit slow and cumbersome in the beginning, but you’ll be a master in no time and the superior flavor makes it all worthwhile. When peeled, chop the shrimp coarsely and mix with the fresh dill, mayo (use Duke’s or Hellman’s if you can), sour cream, and lemon. Add salt and pepper and horseradish to taste. Substitute the latter for brandy if you feel so inclined. Now, let shrimp mixture rest in the fridge while you take some white bread (I prefer sourdough, but anything will do) and fry it in the pan with a generous amount of butter until golden brown. Rye bread, which pairs beautifully with seafood, works great as well. If you want to make the toasts look somewhat fancier, use a pastry cutter or empty glass to make rounds. Otherwise, cut the bread into halves. For the assembly, carefully scoop the shrimp mixture onto your toasts before adding a small scoop of Caviar of Kalix and topping it all off with a sprig of dill and garnishing with a lemon wedge. Caviar of Kalix is a vendace roe from the northern Swedish town of Kalix, a delicacy often served at the Nobel Prize banquet, and not easy to find outside of the country. Either leave it out (it’s almost as good without!) or substitute for lumpfish roe or whitefish roe — or whatever mild-ish roe you can find. I hope you enjoy this Swedish classic and that your guests love it too! If you’re ever in Stockholm, make it a priority to dine at Riche, the restaurant Tore Wretman purchased in 1945 at the age of 29, or the adjoining Teatergrillen, where his culinary legacy is alive. In fact, Toast Skagen is still on the menu.